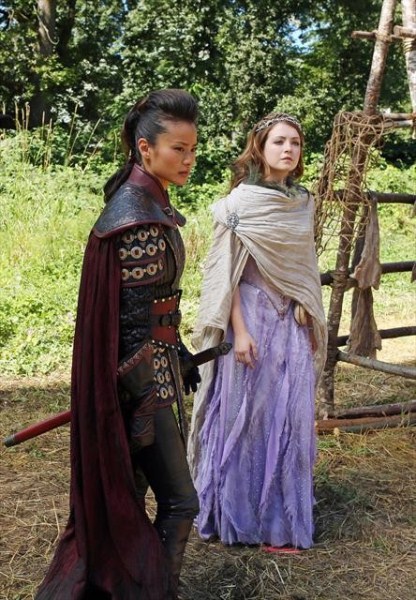 Once Upon A Time returns tonight to ABC with a new episode called “Lady Of The Lake.”  On last week’s show Prince Charming ran into the Town Hall front lawn desperately searching for Mother Superior (Blue Fairy), who was actually one of the fairies who helped send Emma through to Storybrooke via the magical tree. Prince Charming asked if there might be another one on the other side; she said it’s possible, but that she doesn’t know, and, without any fairy dust to guide them, there’s was no way of knowing.

The town was also in an uproar, and they looked at Prince Charming to be the leader, a man brave and smart enough to save them from this horrible, magical ordeal . . . and maybe even get everyone back home. To their real homes!  We did and we recapped it here for you!

On tonight’s show Emma and Mary Margaret, with the aid of Mulan, Aurora and brave knight Lancelot, attempt to find a portal that will bring them back to Storybrooke. But a dark force threatens their safe return. And Henry tries to talk Jefferson into reuniting with his daughter. Meanwhile, back in the fairytale land that was, on the eve of meeting Prince Charming’s mother, King George poisons Snow White, and the only antidote lies within the waters of the Lady of the Lake.

Tonight’s episode 3 is going to be exciting, and you won’t want to miss it. So be sure to tune in for our live coverage of the season 2 episode 3 of Once Upon A Time — tonight at 7PM EST!

ONCE UPON A TIME SEASON 2 EPISODE 3 LIVE RECAP HERE!