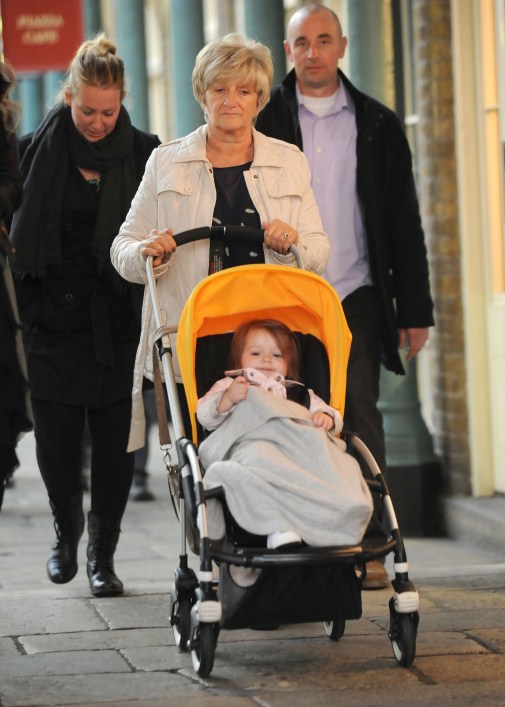 Harper Seven Beckham spent the day with her grandma, David Beckham‘s mother Sandra Georgina West in London, England on Monday. The doting grandma pushed her 15-month-old grandchild in a yellow trendy Bugaboo Bee stroller as they strolled through the Covent Garden area of the city. Harper kept warm on the chilly day in a jacket while covered by a thick gray blanket.

Harper’s dad who is considered one of the sexiest soccer stars is set to release another underwear collection with HM before Christmas.

‘Who wouldn’t want to get their hands on Becks’ kecks this Christmas?’ A source told the Daily Star newspaper.

Beckham  has previously spoken of how much he enjoyed working on the range.

‘The underwear is totally my designs, and are things that I like to wear. Working with a team has always been a key part of my life and I found that to be the same when developing this range,” he said. “Collectively with my design team we spent time working on the feel, fit and style to ensure the product is not only something I would wear but one which I would be proud to put my name to.”

“I always want to challenge myself and this was such a rewarding experience for me. I’m very happy with the end result and I hope HM’s male customers will be as excited as I am,” the dad of four said.

What do you think of seeing Beckham in more underwear ads?

Tyra Banks: “I’m Really Ready To Have Some Babies!”