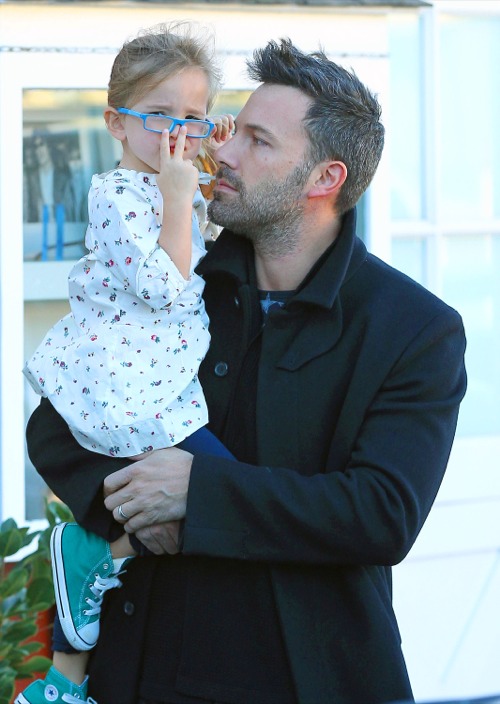 Ben Affleck and his wife Jennifer Garner caught breakfast with their 3-year-old daughter Seraphina in Brentwood Country Mart in Brentwood, Ca on Thursday.

Affleck wore a black jacket with jeans as he affectionately carried his little girl out of the restaurant. Seraphina looked adorable wearing blue glasses as she gave the paparazzi a funny look. Garner who was not pictured next to the father-duo was dressed in workout attire.

The pair are reuniting for another film, which is set to star Damon and Affleck’s brother, Casey Affleck. Affleck will direct the movie about New England’s most notorious gangster, James “Whitey” Bulger. Damon portrays Bulger in the biopic, while Casey will play the mobster’s brother, Billy.

“There’s a first draft and we’re still working on it. It’s a movie I really want to make but it’s really a tough story because it’s too long,” Affleck explained of the Boston-based film. “I really want to wait to get it right. You can’t f**k up Whitey Bulger. That’s it, that’s the only thing that will be remembered for the rest of your career.”

Jessica Simpson: Is “Focused & Determined” To Lose The Baby Weight