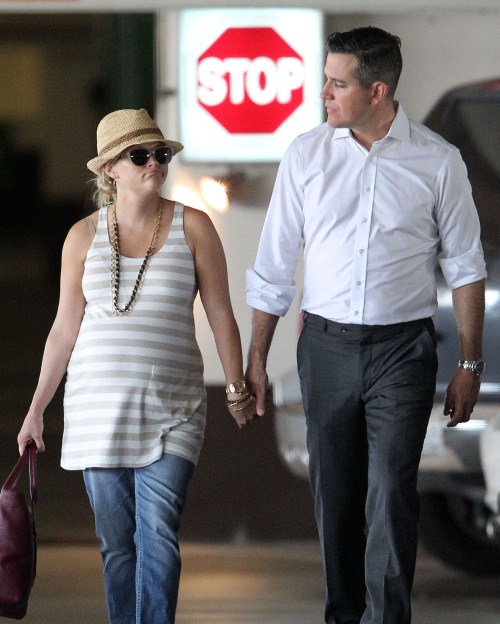 Reese Witherspoon has been spotted leaving a Santa Monica hospital Friday September 21st after a checkup. Witherspoon is seen sporting a face-wide smile as she’s holding hands with husband Jim Toth, I guess the checkup went pretty darn well for the parents expecting their first child as a couple.

Witherspon and Toth have recently put up their Libbey Ranch in Ojai for sale for the very modest price of only 10 million US dollars(too bad it’s not in Canadian). The couple are, or were, using this ranch as a second home. Not too shabby for just a country house, eh? The best part of it is, get this, Witherspoon bought the ranch in 2008 for 5,8 million dollars and she’s now selling it for almost double that. Yes it hasn’t been sold yet, but it makes you wonder where is that recession and housing crisis that everyone seems to be talking about?

Earlier during the week, the mom of soon-to-be-3 was spotted playing the part of a cheerleader at one of her son’s soccer games in Los Angeles. Deacon Phillippe is quite the avid player of soccer(or as it should be called, football).

“She is pretty pregnant. It was really hot outside but she was a trooper,” said a source.

“She had a great time watching Deacon,” added the insider. “She is a very devoted mom.”

The soccer mom is almost on the brink of explosion but she still finds the energy to not only go watch her son Deacon’s games but even give a pretty spirited cheering effort. She’s quite the trooper indeed.