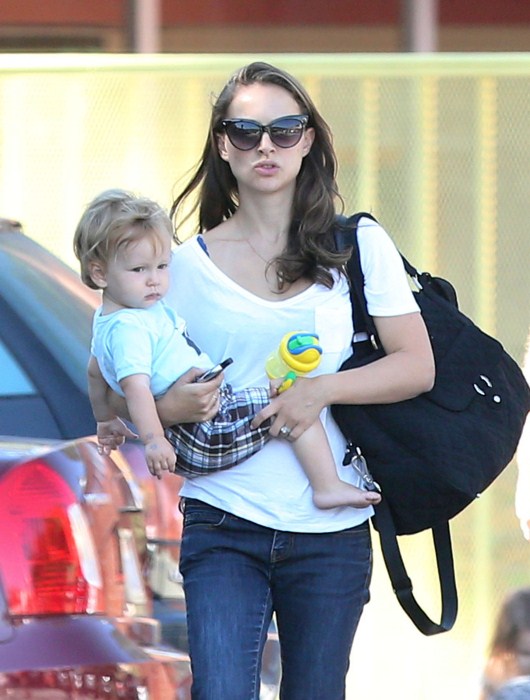 Natalie Portman was spotted taking son Aleph to a community center gymnasium on Thursday in Los Feliz, California.  Portman who was also accompanied by her parents wore jeans and a white top while carrying Aleph. The one-year-old wore tot looked cute with his messy blonde.

The actress has been out on the campaign trail supporting President Barack Obama. On Wednesday, she made an appearance at a Cincinnati Obama campaign-sponsored Women’s Summit at Union Terminal.

Portman said the Republican Party and their presidential ticket of Mitt Romney and Paul Ryan did not have the best interests of women at heart. She pointed to attacks on the Affordable Care Act’s mandates that insurers provide birth control to women and ensure preventative care such as mammogram screenings for breast cancer is covered, as well a bill sponsored by Ryan and embattled congressional candidate Rep. Todd Akin (R-MO) that would eliminate all abortion funding except for cases of “forcible rape.”

“We need to stand up for ourselves,” Portman told the packed auditorium that was crowded with an audience of mostly women. “Our mothers and our grandmothers made giant steps for us. We can’t go backwards. We need to go forwards.”

Nicole Richie: I Want My Kids To Have “Stability”

The Bold and The Beautiful Spoilers: Kelly Kruger Brooks And Darin Brooks’…