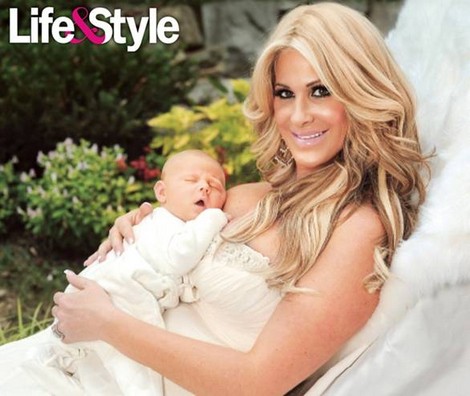 On August 15th, Kim Zolciak and her husband, Troy Biermann welcomed their second son into the world and now she’s talking exclusively with Life & Style about how having two babies within fifteen months has changed her whole world. The Real Housewive’s of Atlanta star seemed to fall head over heels for Troy in a hot minute and if you blinked you probably missed the courtship, first baby and actual wedding.  Yes, she really did move that quickly and has always said that she simply knew Troy was the one.

The star gushes about her new baby and how this is by far the happiest time in her life, telling the magazine,

“It was the easiest pregnancy out of all of them!” she says. “I had a couple of weeks in the beginning that were really rough, but then it was great.  There’s nothing else in the world like it. I’m just at peace. I was never out there searching for something, but there was always kind of a missing piece, and I have it all now. I literally have everything.”

Kim also has two older daughters, Brielle, 15 and Ariana, 9, both from previous relationships. If you’ve caught a bit of RHOA then you have seen firsthand the genuine love that they seem to have for Troy. It looks like they really have become a blended family. According to Kim, there’s always the possibility of more babies because Troy wants his own little football team and Kim has never been able to keep her hands off of him.

Do you think that Kim and Troy are the real deal? As far as reality television goes, do you think they put on an act for the cameras, or are they really that happy? Tell us in the comments below!