Kate Hudson Takes Off With Bingham 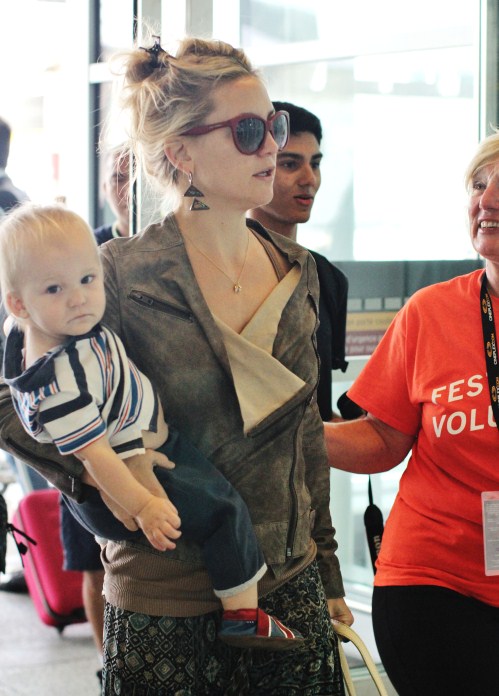 Kate Hudson was spotted carrying her one-year-old son Bingham through the airport in Toronto, Canada on Monday. She looked casual in a bohemian ensemble while Bingham wore a striped shirt and navy pants. Hudson was not in the mood to sign autographs and looked annoyed at the paparazzi trying to take their picture. Once at the check-in counter, the actress asked for assistance to shield herself from the picture takers.  Fortunately, Bingham seemed unfazed from the attention.

Hudson was at the Toronto Film Festival to promote her latest film The Reluctant Fundamentalist. On Saturday, she attended the premiere of the film with fiance Matthew Bellamy in a stunning white Alexander McQueen gown that featured a split. The Toronto Star called the actress the best dressed of the film festival so far:

“There’s still almost a week left of TIFF parties and galas but it’s going to be tough for anyone to top Kate Hudson for the best dressed award. Poured into a sleek-fitting white gown by Alexander McQueen, the actress was luminous in the darkly lit Club floor at Soho House before heading over to the presentation of her movie, The Reluctant Fundamentalist.”

Jessica Simpson: “All The Weight Did Not Come Off With The Baby!”