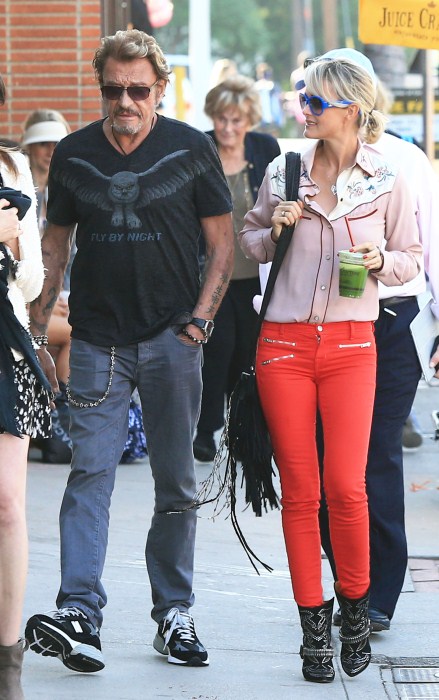 French singer Johnny Hallyday was spotted with his wife Laeticia and daughters Joe and Jade in Pacific Palisades earlier on Thursday. The French singing sensation has been going through a kind of rebirth in his singing as of late which is why he’s been on the plane touring once again. The real reason for his being in Los Angeles is not for a tour, however, but because of medical reasons.

The French ‘Elvis Presley’ spent 5 days in a Fort-De-France, Martinique hospital for cardiac problems. The French singer relieved his worldwide fan base when he tweeted that it was finally only a case ‘severe bronchitis’.

“He has been undergoing medical examinations since Tuesday but he only slept last night,” Sebastien Farran, his manager,  stated via SMS.

“The nature of the examinations is general,”

All his followers breathed a deep sigh of relief. The ‘Elvis Presley’ moniker is really not a joke, as this guy really is very big in French speaking areas of the world. The singer is also reportedly working on a duet with Quebecker Celine Dion which could be huge for a live performance.

Johnny Hallyday has 2 children from previous marriages/relationships: David Hallyday, 47, from his first marriage to Sylvie Vartan and Laura Smet, 29, from his 4 year relationship to Nathalie Baye. His two daughters with present wife Laeticia have both been adopted from Vietnam.