Gwen Stefani Touches Down With Her Future Rocker 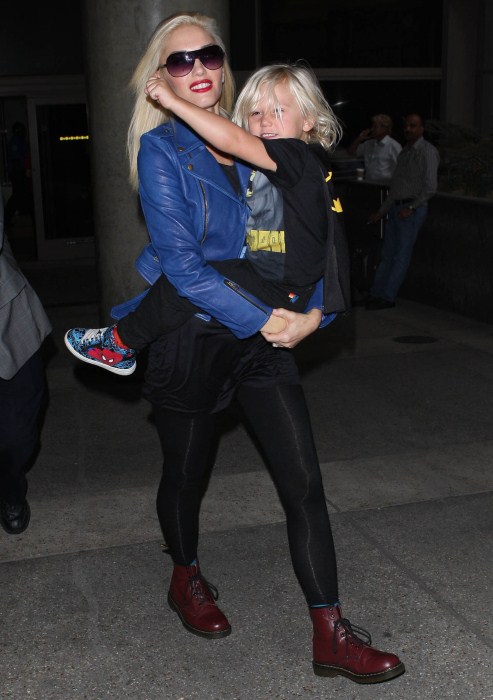 Gwen Stefani and her 4-year-old son Zuma were spotted touching down at LAX airport in Los Angeles, Ca on Saturday.  The singer looked happy to be home as she carried Zuma while giving the paparazzi a big smile. Zuma wore a batman shirt with matching black pants and Spider man shoes as he held tightly on to his mom.

During an appearance on The Ellen DeGeneres Show, Stefani and her No Doubt band mates were joined by Zuma as they did a sound check. The little rocker looked right at home on stage as he strummed out a few chords while his mum jumped up and down.

In the same show, the mom-of-two talked about Zuma’s budding musical talent.

“Zuma’s the one who’s showing more interest in the guitar. Since he was tiny, he’s always played guitar. I mean, he’s not really playing the guitar, but he thinks he does,” she told.

She also admitted that it took so long for the band to releases Push and Shove because they are all parents now.

“It was challenging,” Stefani admitted.

“We’d get together like three times a week, and I tried all versions. Like, ‘Oh, today I’m gonna bring them with me,’ and that didn’t work. So then I was like, ‘Today I’m not gonna see them, I’m gonna work all day, and then I’ll be with them tomorrow.’ It was just chaos,” she added.