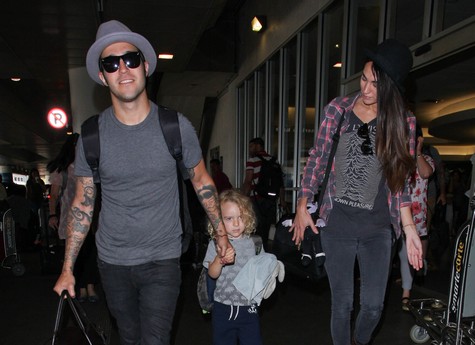 Fall Out Boy singer Peter Wentz and girlfriend Meagan Camper arrived at the LAX airport in Los Angeles, California on August 16, 2012 with his son adorable son Bronx Wentz ready to take flight.  Bronx look adorable with his monster backpack and dracula doll and at one point daddy Pete picked him up and carried him.

Pete and Meagan have been dating since Pete broke up with his wife of almost three years Ashlee Simpson.  A source close to Pete and Meagan recently said about their relationship, “Pete’s in a really good place. He’s excited to see where it goes.”

Pete Wentz has taken a time out from the Fall Out Boys and seems to be concentrating on fatherhood and his girlfriend Meagan seems more than willing to participate!

Ryan Gosling Believes That Marriage Does Come Before a Baby Carriage