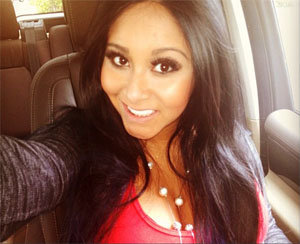 Lorenzo LaValle is Snooki’s baby boys name! Her Jersey Shore friends spilled the beans, and thought her bestie JWoww tried to cover saying it was a name Nicole and Jionni were considering, Snickers admitted that it was a done deal. She was sold.

Today Snooki posted a picture of herself with the caption “”Relaxin with child.” She later said, “Yes I know I’m a pregnant whale,” and warned her fiancé, Jionni to steer clear of her and watch his step! “Oh god I’m feeling like a witch today. Watch out @JLaValle, I will hurt you.”

Wow, sounds like she is getting there. I am excited for her. i don;t think she looks like a whale, she looks super pregnant and beautiful! The end is always hard, you get so uncomfortable, nothing fits and you are MUCH bigger than you are used to. It is easy to be hard on yourself. But it will all be worth it when the little guy pops out!

I think Lorenzo LaValle is a cute, Italian, fist pumping, juice head kind of name. It totally fits Snooki and Jionni! I am super excited for them I think they are going to make awesome parents! I can’t wait to see pictures of their little guy, he is sure to be a cutie. Just a few weeks left for Nicole. Hang in there mama!!!

Pregnant Reese Witherspoon Leaving The Doctor After Her Check Up (Photos)