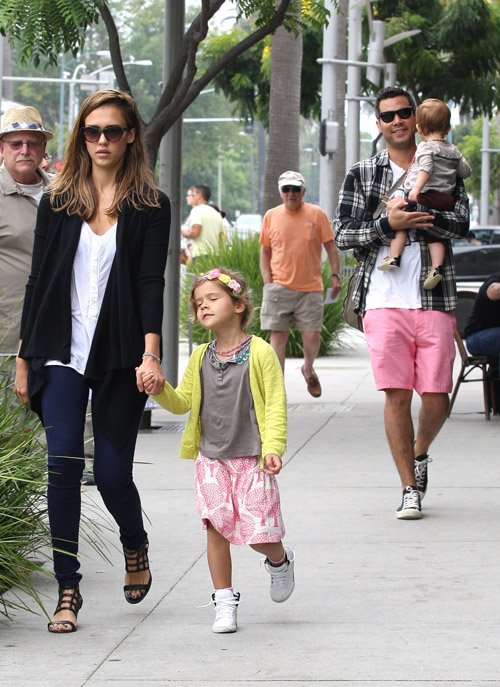 Jessica Alba and Cash Warren were spotted taking their daughters Honor and Haven to breakfast at Nate ‘N Als Delicatessen in Beverly Hills, California on Saturday.  The actress looked stylish in a white top under a black sweater paired with skinny jeans and black flats while holding Honor’s hand. Alba must have let Honor dress herself dressed because she was mismatched in a a yellow sweater, grey top and pink skirt.  Warren followed behind the two with Haven.

Jessica Alba tries her best to be a responsible parent, but she admits there was a moment where she questioned her skills.

“I found my daughter Honor sitting in her crib, eating these tiny beads from the inside of her diaper,” the actress, 31, tells SELF in its September issue. “They were all over her face. It was a moment of terror.”

The incident inspired Alba to start The Honest Company, a line of eco-friendly baby products.

“It took me three-and-a-half years to launch. When things didn’t go smoothly, I’d get really upset. I worried that I was wasting so much time and money. It really does feel like this is my third baby,” she admits.

“It’s a deep passion of mine and I spend all my time at the office. I think it’s a nice balance to Hollywood because this is something that I could actually control. I could see [it through] from the beginning to the end and there’s something really wonderful and fulfilling about that. Especially when it was so hard to get it going for so long. For it to actually be here and exist is pretty cool.”

Halle Berry Takes Nahla To The Movies Amidst Court Battle