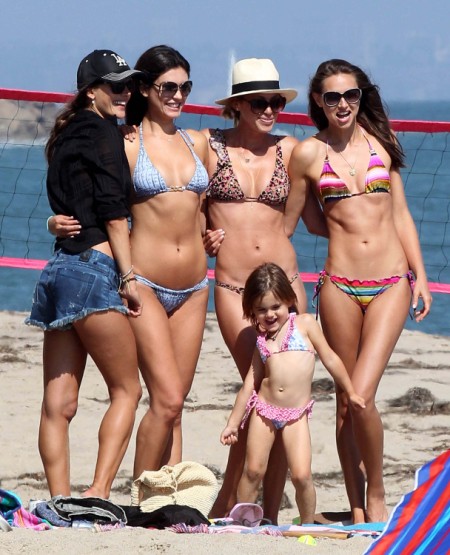 Alessandra Ambrosio hit the beach for some volleyball and quality time with daughter Anja Mazur in Malibu over the weekend. Check out little Anja. Such a model in the making! There’s attitude in that pose!

Alessandra also hung out with some friends as well as her husband, Jamie Mazur. The couple welcomed a new baby boy, Noah Mazur, just two months ago. Can you believe Alessandra’s body? Insane! Before giving birth, the Victoria’s Secret model pledged to be ready to strut her stuff at the launch of the Victoria’s Secret store in London later this month.

She told Vogue magazine all about it: “I already have jobs planned for afterwards so hopefully will be back in shape! I told my booker and my manager, ‘I know I have a job to do, so just book the jobs and hopefully it’ll be fine. I only have a few more jobs to do before I have the baby – all editorial, no more catwalk now – and then I hope to be back in London for the opening of the Victoria’s Secret store in July.”

Goals and motivation are the key! I’d say they worked, how about you?