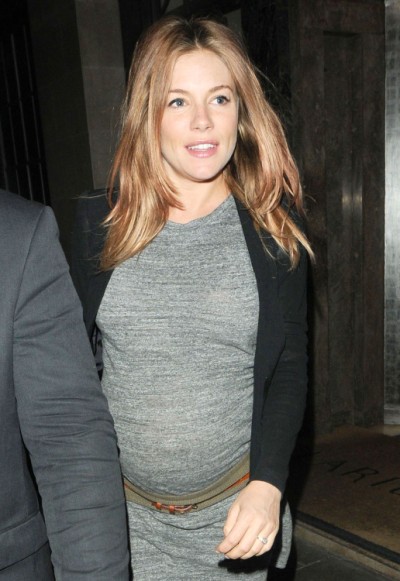 Sienna Miller isn’t about to let her burgeoning baby bump stop her from attending a hot party or from wearing a hot dress.

Sienna’s fiance, Tom Sturridge, is Pattinson’s best friend which is most likely why she made the effort to get so glammed up although Sienna is making a habit of not letting this pregnancy slow down her stylish lifestyle one bit.

Sturridge and Sienna were just seen in Portofino, Italy, enjoying a loved-up holiday. In Touch Weekly reported the couple weren’t shy about celebrating the romantic adventure with indulging in some PDSs and some bottles of wine, though the magazine said the pregnant star was very cognizant of how much she allowed herself.

“Sienna is European and it’s common there for a pregnant woman to have a glass of wine or champagne,” a source told In Touch “She’d never do anything to harm her unborn baby.”

Sienna is just coming off filming, A Case of You, in Brooklyn and, according to IMDB.com, has nothing new scheduled in the coming months so hopefully she can keep enjoying her new fiance and belly, partake in more pregnancy Yoga, and relax until her little one is due.