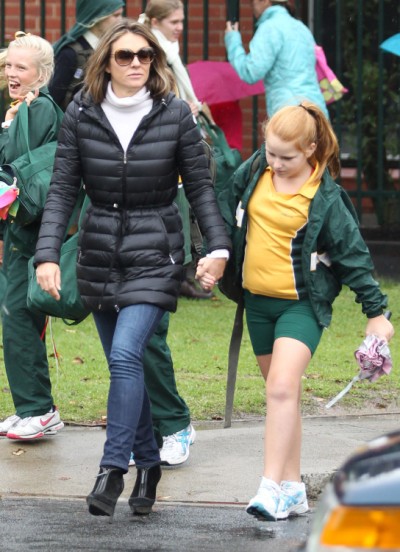 “I’ve added three more children [to my life],” Hurley to People magazine at Monday’s Breast Cancer Research Foundation’s Hot Pink Party in New York City. “And I’m learning to be a stepmother to three extra children, so that keeps me running around and on my toes.”

Hurley has admitted relief before that the two families, while adjusting, are getting along well. Shane has 14-year-old Brooke Warne, 12-year-old Jackson Warne and 10-year-old Summer Warne (seen holding hands with Hurley in the picture above).

Though the couple have been dating since Hurley’s divorce from businessman, Arun Nayar, last June, she and Warne have not started the planning for walking down the aisle just yet. “We haven’t actually managed to arrange a wedding yet,” she says. “But it’s definitely in the pipeline.”

I wonder if she’ll ask Elton John to give her away again. He walked her down the aisle in his first wedding. The two are long-time friends and Elton is even Damian’s godfather. Elton is new to parenting but Hurley says he’s already an old pro. He’s also the godfather to John Lennon’s son, Sean, and Victoria and David Beckham’s sons Brooklyn and Romeo.

“He’s always been a wonderful godfather with my son, who’s now 10, and I’ve seen him with his son and he does indeed change diapers,” she said of Elton’s son Zachary, 1, with husband David Furnish. “He’s very hands-on and a natural parent. Elton’s always been incredibly kind, gentle and loving.”

I would love to have Elton John as my godfather, wouldn’t you? Can you imagine the fun?

Rachel Zoe, stylist to the stars and her son (Photos)

Elizabeth Hurley Touches Down With Son