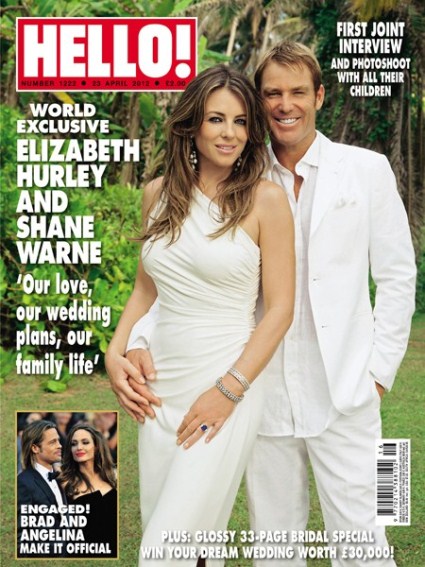 Elizabeth Hurley is fast becoming Mrs Brady! The Gossip Girl actress has a 10 year old son Damian Hurley. And next year she’ll become Stepmom to her fiance’s three kids. Liz is the happiest she’s ever been and has opened up to Britain’s Hello magazine about the big changes in her life.

The 46 year old is engaged to Aussie sportsman Shane Warne.  He has three kids so they’ve become a kind of Brady Bunch. Shane has 14 year old Brooke Warne, 12 year old Jackson Warne and 10 year old Summer Warne. But luckily for Liz they all get along. ‘I love it when we’re all together. I just try to be the best stepmum that I can‘. They even call her M2 or ‘Mummy Two‘.

Elizabeth – who starred in the first Austin Powers movie – says her expanding family has been an adjustment ‘it’s a big change going overnight from one child to four‘ but she wouldn’t have it any other way. The family spend some of the year in Australia and part of the year at her farm in the English countryside.  Damian – who’s an only child – suddenly has three older siblings and he’s loving it. Liz says ‘Damian adores them all and rotates round sleeping in all of their bedrooms when we’re in Australia‘. It really is starting to sound like a Brady Bunch set up!

Liz and Shane have been together for two years and she says ‘Despite differences in our backgrounds and careers, we both come from very secure, loving homes and to me that says a lot.’

Gwyneth Paltrow Shops The Day Away With Apple