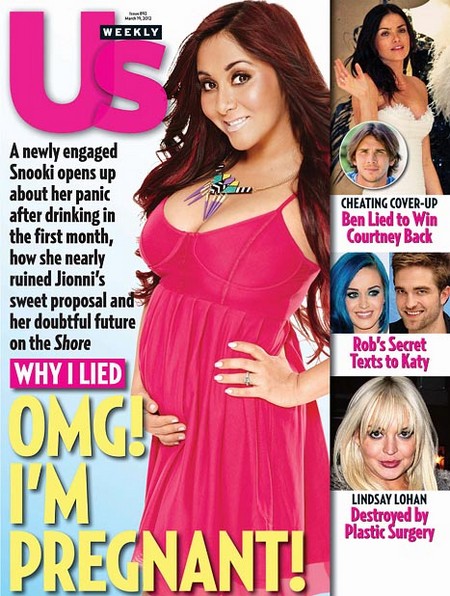 Jersey Shore star Snooki has sat down with the magazine and given them all the details about her engagement and her pregnancy.  She dishes on how she was in a panic after drinking during the first month of her pregnancy and how it nearly ruined Jionni LaValle‘s sweet proposal.  They also claim to know why her future is doubtful on Jersey Shore.

Us has the scoop: After weeks of rumors, Nicole “Snooki” Polizzi confirms exclusively in the new Us Weekly that she is 15 weeks pregnant — and engaged to the father, beau of one and a half years Jionni LaValle. “I have different priorities now,” reformed party girl Snooki says. “I don’t care what anybody else thinks. As long as I know I’m ready and he’s ready.  Adds LaValle: “We are not going to screw this up.”

>The once pouf-haired star and LaValle discovered the news “right after New Year’s,” she said. Snooki’s first thought? “‘S–t, I’ve been drinking!’ I was worried. It was New Year’s Eve and we were in Vegas, so I did go crazy.” she admits.

Snooki is currently filming a spin-off with fellow Jersey Shore cast mate JWoww, and I can’t imagine how fun that is going to be sans booze and partying.  Meanwhile rumor has it that MTV wants to give the Snookster her own reality show which will follow her during her pregnancy.  What do you think about the Snookster bringing a little guidette into the world?  Do you think she did it for the reality show?  Sound out in the comments below and let us know your thoughts!

Sienna Miller Opens Up About Pregnancy