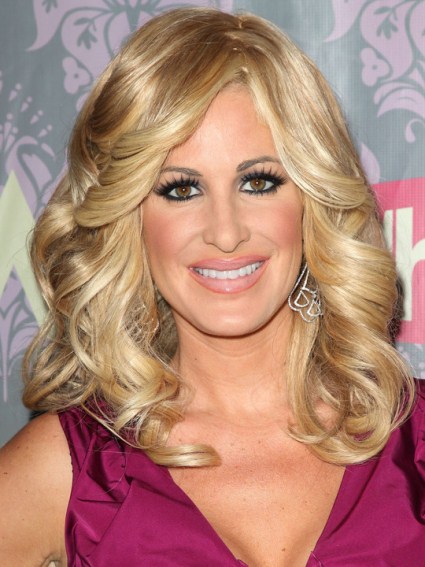 It’s been quite a week for celebrity baby news. The congratulations have been coming thick and fast and today it’s for The Real Housewives Of Atlanta blonde Kim Zolciak. She’s revealed child  number four is on the way.

The 33 year old reality TV fixture and NFL star Kroy Biermann are not wasting any time adding to their family. Kim only gave birth to their first child together – Kroy Jagger Jnr –  last May. Yes – 10 months ago! She announced the pregnancy like most stars do these days… on Twitter. She tweeted ‘”Kroy Biermann and I are happy to announce YES WE ARE PREGNANT“. An hour later she added ‘Thank you for all the Congrats! We feel so blessed!’ …and later still…’I really appreciate all the Congrats from each and every 1 of u today! We are so excited and so blessed! Thanks again!’

Kim is already showing off her baby bump in the new issue of Life & Style and she told the mag ‘to decide we wanted to get pregnant again and have it happen so quickly was such a blessing.‘ She’s also looking forward to having two young ones to keep each other company ‘I’m so excited that KJ will have a little buddy‘

She already  has two daughters from a previous relationship. They are 15 year old Brielle and 9 year old Ariana. So it’s going to be a full house but nothing Kim can’t handle! She also has a built in babysitter with a teenage daughter. There’ll be plenty of hands if life gets a little too crazy – even for Kim.