LeAnn Rhimes And Family Head To The Soccer Field! 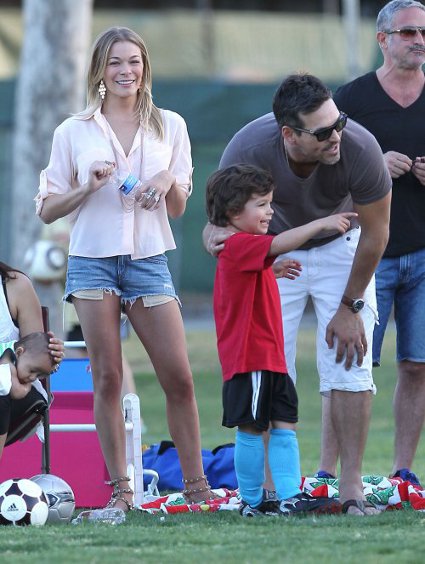 It looks like the entire family was there! LeAnn Rhimes and husband Eddie Cibrian were spotted at a soccer field recently with their family to support Eddie’s 4-year-old son, Jake, in his soccer match. Big brother Mason, who is 8 years old, decided to put his cheering clothes on as well and support his lil’ bro.

Eddie’s ex-wife, Brandi Glanville, was also in attendance, so we suspect things might have gotten a tad awkward. However, despite the somewhat unfriendly past shared by the two females, the day seemed to be relatively cordial and the two even seemed to partake in friendly conversation.

Brandi, who’s perhaps best known for her appearances on Real Housewives of Beverly Hills, sported a black tanktop with white pants and sunglasses, while the country singer strutted around in some jean shorts and a khaki blouse.

“What a happy, peaceful Sunday! Ended it w/ dinner w/ both sets of parents and @darrellbrown & @mantis7jewels Lovely day!”

As always, LeAnn and Eddie weren’t afraid to show the world that they love each other. Even at a soccer game for tots the couple was seen  hanging all over each other.

What do you think of this couple?

I don’t know if lil’ Jake won his soccer game, but it sounds like the family had a #Winning day.