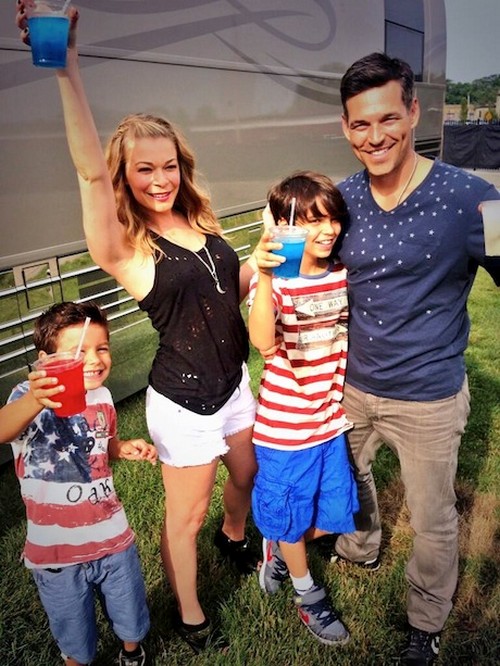 LeAnn Rimes had a fun July 4th celebration with her hubby Eddie Cibrian and her stepsons, Jake and Mason.  LeAnn tweeted the photo above with the caption, “Here’s to a fantastic 4th! From our family to yours! Stay safe and make memories!”

The boys were dressed appropriately for July 4th proudly displaying their red, white and blue tee shirts while LeAnn and Eddie were dressed casually for the occasion.  They looked like they were having a great time!

The family was at The Coast West Music Fest in Muskegon, Michigan where LeAnn was set to perform for a July 4th performance.  The Coast Music Fest lasts 6 nights, 38 bands, and sounds ranging from country to rock to blues and beyond!  LeAnn had a great time at the Festival and tweeted to Michigan, “Thx Michigan for an amazing 4th show!!! Love you”  Also performing that day was country star Josh Turner and LeAnn tweeted a pic with him.LeAnn also tweeted a pic of Jake sitting on the drums and tweeted, “We Be Jammin.”  then later tweeted, “‘Jake is helping my crew load in cause he wants to learn how to put a drum set together. So stinking cute & awesome.”

LeAnn was having a tweeting sort of day because later she tweeted a photo of Mason in the closet with the following caption, “Boys will be boys and hide in closets on the tour bus.”

Check out all the photos below of LeAnn’s July 4th tweets!

Sharon Stone Does Some Parisian Shopping With Roan