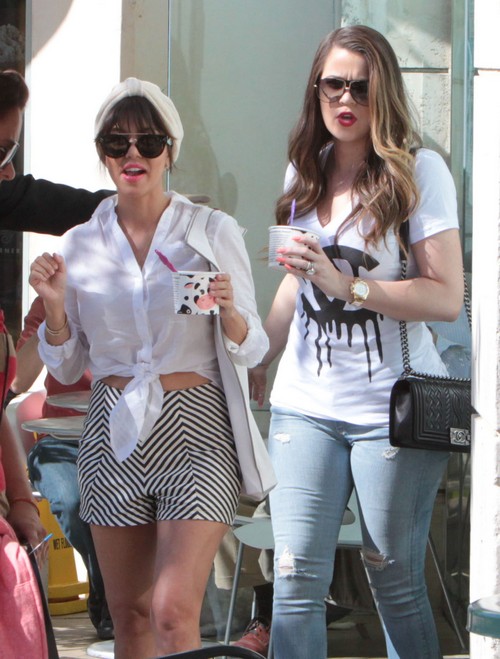 Khloe Kardashian and Kourtney Kardashian can’t seem to get enough of their new niece, North West. The little girl who was born just over three weeks ago, must definitely be feeling the love and support her aunties are giving her, seeing that they’re over at Kris Jenner’s home every other day to see how the little one is doing.

In case you didn’t know, Kris Jenner invited Kim Kardashian and Kanye West to move into her Calabasas mansion, as opposed to living in a hotel, until their $8 million Bel-Air mansion is finished with its renovation stages, which means Khloe and Kourt are free to pop in whenever they feel like, and from what sources are saying, they’re doing just that.

“Kourtney and Khloe are obsessed. Kourtney has been great with advice, from baby gear to reassuring Kim in all her decisions. The family is really supportive,” an insider shared. Kourtney has been a little strict with Kim in the last few weeks after the 32-year old stressed how badly she wanted to take her daughter on tour with her once Kanye leaves for Europe, but we guess they’ve put their differences aside. Besides, Kourtney only wants what’s best for Kim and the baby.We can definitely see why Khloe is being so affectionate and can’t get enough of North; she’s still hoping that she will one day conceive and have a baby to Lamar Odom, so seeing Kim’s baby girl must be giving her the determination to continue fertility treatments in hopes that she’ll soon be pregnant.

As for Kanye, he’s overwhelmed with the fact that he’s a new father. Though we’ve seen him make numerous of public appearances since Kim’s birth, most of the days he’s playing with his daughter and films every little thing she does: “Kanye wants to know how to do everything and be able to hold and soothe her. He’s been documenting everything. He doesn’t want to miss a moment,” another source shared.

Aww that’s cute. Say what you want about the Kardashians, but when it comes to family, you know that they are always there for each other to show their support.