Jennifer Aniston Is Getting Married and Having A Baby (Photo) 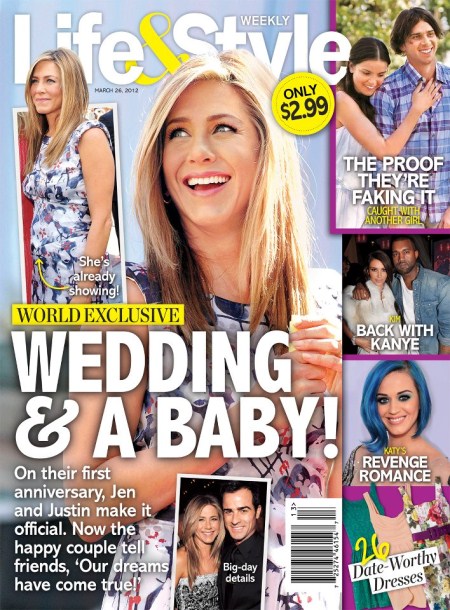 Life & Style magazine claims that on Jennifer Aniston and Justin Theroux‘s first anniversary they are going to make it official and tie the knot.  The couple have let the cat out of the bag to their friends  saying: “Our dreams have come true.”

There has been speculation for some time that Jennifer is trying to beat Angelina Jolie down the aisle.  Rumor has it that Angelina and Brad Pitt are ready to get hitched any moment.  But we all know Jennifer Aniston pregnant or getting married rumors have to be taken with a grain of salt.  Jennifer has been getting married or pregnant at least 100 times in the past year according to the tabloids.  So far nothing has happened.

Not one to be discouraged that none of the claims of Jennifer’s pregnancies have transpired Life & Style claims once gain she is pregnant.  If Jennifer was pregnant all the times the tabloids have claimed she would have more than a dozen children at this point.  Nevertheless the magazine even got an unflattering photo of Jennifer claiming further proof that Jennifer is preggers.

So what do you think does Life & Style have it right?  Is Jennifer Aniston pregnant and getting married?  Sound out in the comments below.