Christina Applegate Opens Up About One Year Old Daughter Sadie 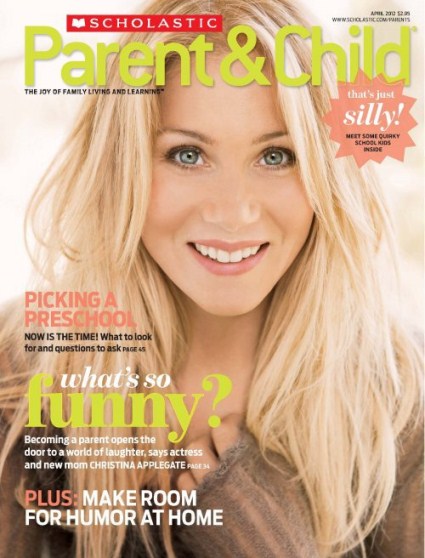 Christina Applegate is on the cover of this month’s Parent & Child magazine. The 40 year old actress opens up about her one year old daughter Sadie LeNoble with fiance Martyn LeNoble and how it was tough to go back to work just six weeks after giving birth in January 2011. At the moment it’s a case of art imitating life with Christina playing a first time mom of a young baby who’s trying to juggle her personal and professional lives.

So with a lot of parallels in work and real life – do off camera experiences end up on the show? ‘Absolutely. For instance, the birth episode included a lot of what I actually experienced. I didn’t mention this to anyone else while it was going on, but I turned pushing into a competition. In the back of my head, I needed to be the person who pushed a baby out the fastest in history. Another thing was the mirror. What you see on the show is exactly how it happened. I’d wanted a mirror to see the delivery. The mirror came in, and Martyn and I both screamed, and the mirror went out! Then there was the headband obsession. I had seen a show where someone said the one thing a mom should bring to her delivery was a headband. This woman said, “People are going to be taking a lot of pictures of you with your new baby, and if you have a headband, at least your hair’s not going to be so matted looking.’

What is Christina’s one year old up to? ‘She makes me laugh every day — she’s a funny little kid and a happy girl. She’ll stand on a little box in our room and press her musical bear until she finds the song she wants. Then she grooves, dances, and stomps around for 20 minutes. She has the best time all by herself. Martyn and I love watching that — it makes us laugh really hard.’

And is she more like her actress Mom or muso Dad? ‘A lot of both, because she sees her daddy with guitars playing music for her, and then she sees Mommy being ridiculous at home. She’s sort of an amalgamation of the two of us. But then she has her own things, too. She’s very independent.’

Getting Ready For Baby #2