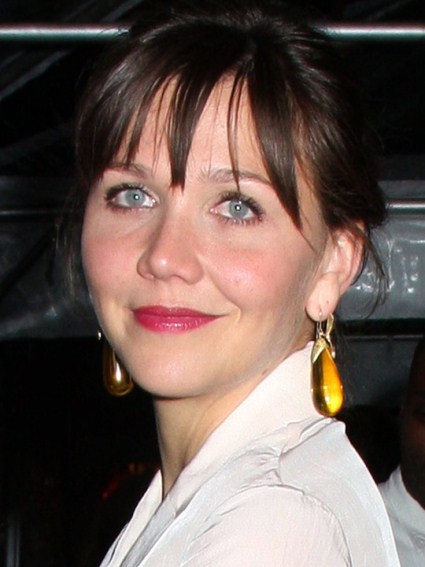 It’s another girl for Maggie Gyllenhaal and husband Peter Sarsgaard. The actress has revealed she’s expecting the pitter patter of female feet in the late Spring. The acting pair already have a five year old daughter Ramona Sarsgaard.

The 34 year old kept her pregnancy a secret at first. She’s told USA Today it was hard work when there are constant red carpet events and award shows to attend ‘I find it difficult to pretend you’re not pregnant, which I had to do. I didn’t let anyone know until three and a half months this time. I went to film festivals. I’m throwing up in the bathroom and having to keep pretzels in my purse, and having to fit into dresses.’ But now Maggie is sporting her baby bump for all to see. She’s glowing and feeling good as she enters the final months…

Motherhood has changed Maggie. She was once an indie darling but a couple of years ago starred in Nanny McPhee Returns ‘Because I am a mom, I’ve spent a lot of time thinking about children and what they’re thinking. I think that it happens naturally. Before, I wasn’t interested in those things, and now I am. It’s not that I wanted to make a movie that my daughter could see. It’s just more appealing to me.’

Her first daughter was born in October 2006. The star of The Dark Knight and Peter married in May 2009 in Italy. The family now live in Brooklyn. Of course Maggie has a very famous brother – Jake Gyllenhaal – who will be an Uncle for a second time when the baby is born.

Khloe Kardashian On Having Children: “When It Happens For Us, It Will Happen.”