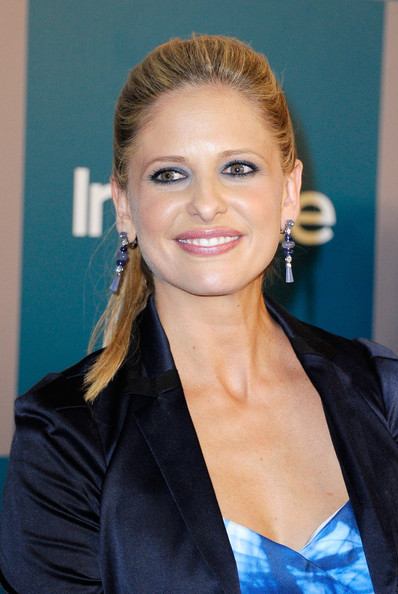 Sarah Michelle Gellar revealed the mysterious identity of her fashion designer: 2 year old daughter Charlotte! Yes, it’s true, unlike 99,9% of celebrities that attended the Golden Globes, or any other major Hollywood event, Gellar opted for something a little different instead of going with a celebrity fashion stylist. The blue color, the white floor length, as well as the accessories were chosen by future superstar fashion designer Charlotte. The outfit was criticized for being ‘too much’  but it should definitely get some extra points now  after we found out who was behind it.

Gellar herself wasn’t nominated for anything but did present the award for Best Supporting Actor in a TV series, miniseries or TV movie, which was given to Peter Dinklage for his work in Game of Thrones. Gellar’s presence was made possible because her hubby, Freddie Pinze Jr, turned babysitter for the evening – a role he didn’t mind as it gave him time to enjoy the game. The NFC semi-finals between the New York Giants and the Green Bay Packers was a state-wide event on Sunday as the underdog Giants upset the 15-1 Packers to make to the NFC championship game.

The Buffy The Vampire Slayer star has been working on Ringer as of last year. She has no easy task on the show as she is forced to play twins Bridget Kelly and Siobhan Martin.

Michelle Williams: “I Really Expected Or Imagined, That Matilda Would Have Siblings”