Michelle Williams: “I Consider Myself A Mother First And An Actress Second” 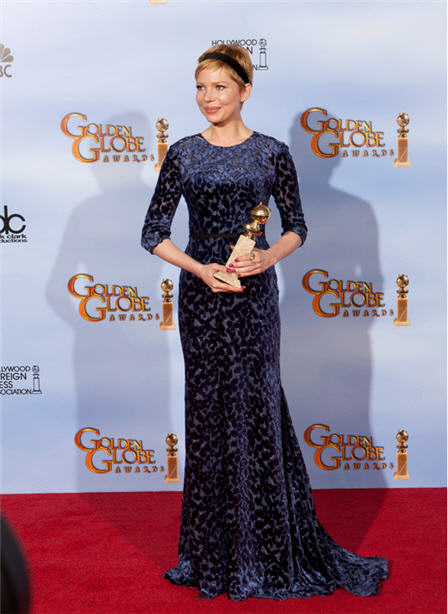 Michelle Williams had a triumphant night yesterday evening at the Golden Globes. She managed to edge out stars like Charlize Theron and Kate Winslet to take h0me the Golden Globe Award for Best Actress – Motion Picture Musical or Comedy for her work in My Week With Marilyn. The Hollywood press deemed that Williams’ reincarnation of maybe the biggest sex symbol of all times – Marilyn Monroe of course – was the worthiest between the deserving candidates of the coveted award. But Williams was fast to redirect the credit where she believes it’s due:

“I consider myself a mother first and an actress second, and so the person I most want to thank is my daughter, my little girl, whose bravery and exuberance is the example that I take with me in my work and in my life,” said acknowledged actress during her acceptance speech. “I want to say thank you for sending me off to this job every day with a hug and a kiss. I couldn’t have done it any other way. It made me so excited to come home at night,” Williams directed at her daughter Matilda Ledger. “And for suffering for six months of bedtime stories, where all the princesses were read aloud in a Marilyn Monroe-sounding voice.” added the 31 year old actress.

My Week With Marilyn is a British biopic based on two books by Colin Clark. The movie is set in 1957 during the making of The prince and the Showgirl, starring Marilyn Monroe and Laurence Olivier. The week in question is in fact the week that Monroe spent touring the countryside of England at the side of Clark, while her husband, Arthur Miller, left the country. The film also stars Kenneth Branagh, Eddie Redmayne, Emma Watson, & Judi Dench. It currently enjoys an 83% rating on Rottentomatoes, surpassing the 80% the movie it’s based on, The Prince and the Showgirl, currently has.

Williams started dating Heath Ledger after meeting on the set for Brokeback Mountain back in 2004. They had daughter Matilda Ledger in 2005(she’s now 6) before calling it quits in a friendly manner in 2007. Elle magazine quoted Williams about the split-up: “I didn’t know where to go. I couldn’t imagine any place in the world that was gonna feel good to me.” Williams later became the attraction of the media frenzy after’s Ledger accidental death in January of 2008.