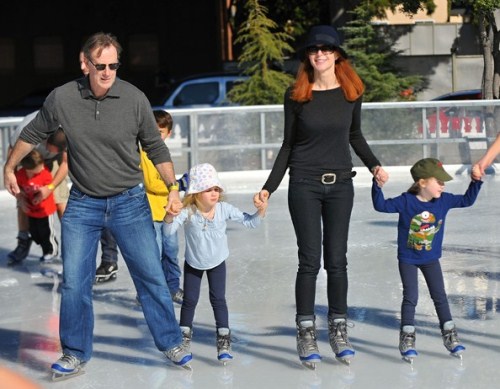 Marcia Cross and her husband Tom Mahoney took their two daughter’s  Eden and Savannah ice skating in Santa Monica, Ca on Wednesday. Cross laughed and smiled as she helped her two girls skate around the rink. Unfortunately, it was a warm day in Santa Monica and the ice started to melt while they were skating.

Mahoney who successfully recovered from a bout of cancer last year decided not tell his daughters he was sick.

‘There’s no point in telling our kids. They were so young and anything to them is normal, so they didn’t know things weren’t normal. They’re enjoying their life. Daddy’s fine. It’s in the past. He has nothing to say,” Cross told.