How I Met Your Mother Star Alyson Hannigan Pregnant With Baby #2! 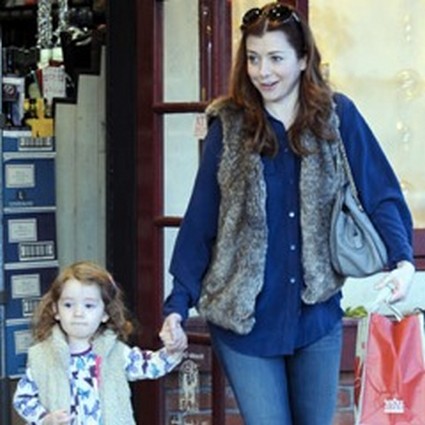 Well, she’s been denying the baby bump rumours for weeks, but today Alyson Hannigan officially announced that she and husband Alexis Denisof are indeed expecting their second child.

The actress was spotted several weeks ago with an obvious tummy bulge, but blamed it on eating too many treats on an outing with her family. Following the incident, Hannigan tweeted “NO, I’m not pregnant! I just ate too much carnival food, that time of the month, hurt my back & couldn’t suck my gut in, and need to do cardio!” She added “And I’m NEVER gonna wear that shirt again!!!”

Fans of How I Met Your Mother may be wondering what producers will do to work around the pregnancy. After all, when Hannigan was pregnant the first time, they filmed her above the waist and utilized strategically placed bowls of fruit and handbags. However, they won’t need any of that T.V. magic this time around. According to How I Met Your Mother Executive Producer Craig Thomas, this is actually a blessing for the show as Hannigan’s character Lily is also expecting! Thomas told E! “Everyone at How I Met Your Mother is thrilled for Aly! And we’d especially like to thank her for timing this perfectly to Lily’s pregnancy on the show!”

Hannigan, 37 and Denisof, 45 got married in 2003 after meeting on the set of Buffy the Vampire Slayer. Their daughter, Satyana, is two.