Charlie Sheen: A Perfect Day Is Spending It With My Children 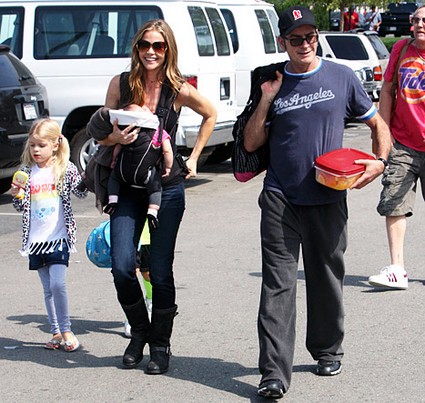 Who know?  Apparently now that Charlie Sheen has sobered up he says there’s “nothing better” than cheering on his daughter at her soccer match.  Charlie  joined his ex-wife Denise Richards over the weekend to watch their seven-year-old girl, Sam, take part in her game and admits it was his perfect day.

Denise – who was also joined on the sidelines by her and Charlie’s six-year-old daughter, Lola, and her adopted three-month-old baby Eloise – tweeted: “Just got back from Sami’s soccer game. She did great.Happy to see Charlie Sheen cheer her on. Proud parents.” To which Charlie replied: “Nothing better!”

Despite divorcing five years ago, Charlie – who also has two-year-old twin sons, Bob and Max, with third wife Brooke Mueller and a grown up daughter, Cassandra, from his first marriage – and Denise have remained friends for the sake of their daughters, but the actress recently insisted they would never get back together.

The 39-year-old beauty said: “That door is closed. I think he and I are better as friends and having our daughters. I’m way too old for him now. I’m way past his age range.  “I take it day by day. One day at a time. I think it’s not about he and I truly. It’s about the kids.

“His lifestyle’s his lifestyle. And I’ve learned to accept it, even if I agree or don’t agree with it. It doesn’t matter. So times where things are very calm and cordial with us, I really relish those times, because it’s so much better for our kids.”

Nice to see Charlie appreciate his family, I am sure it is good for the children to have their dad back in their loves!