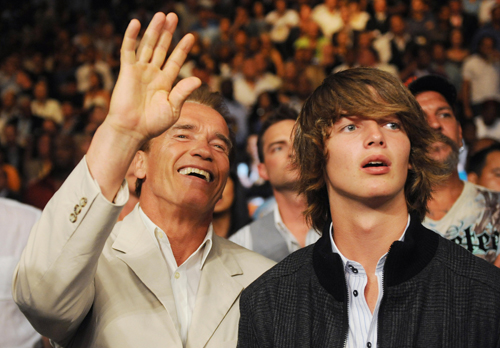 Patrick Schwarzenegger wants to follow in his father, Arnold Schwarzenegger’s footsteps and become a big time movie star.  Patrick is currently modeling and hopes it will be a stepping stone to the big screen.

“I’ve wanted to do some sort of acting stuff down the line. But working as a model is a good way to get comfortable in front of the camera. [Agency] L.A. Models is setting up a lot of cool stuff for me now. Hopefully that will keep jumping.”

Meanwhile, Arnold has announced plans to release his autobiography next year. The former Governor of California has reportedly been working on the memoirs for over a year and they may even include details of his recent break up with Maria, after she discovered he fathered a 13-year-old child with their housekeeper, Mildred Patty Baena.

Jennifer Garner Has A Girls Day With Her Daughters