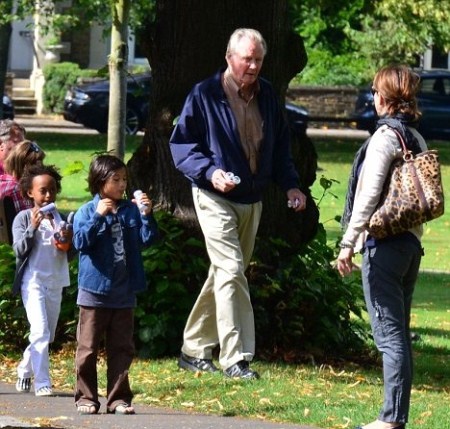 Angelina Jolie’s father, Jon Voight spent the day with his grandchildren last weekend. They were seen at a park in London. He bought them each an ice cream to enjoy as they strolled around the park together. Voight was also accompanied by his girlfriend, who played with the children’s toys during the walk.

Angelina Jolie has been open about her estrangement with her father Jon Voight in the past.

‘My father and I don’t speak. I don’t believe that somebody’s family becomes their blood. Because my son’s adopted, and families are earned,”  Jolie said after Voight told the media that she suffered from serious mental issues after adopting her eldest son Maddox.

In 2009, Jolie reconciled with her father under Brad Pitt’s influence and for the sake of their children.

Mel B Trying To Induce Labor

Ashley Tisdale Has A Fun Day While Babysitting Her Niece