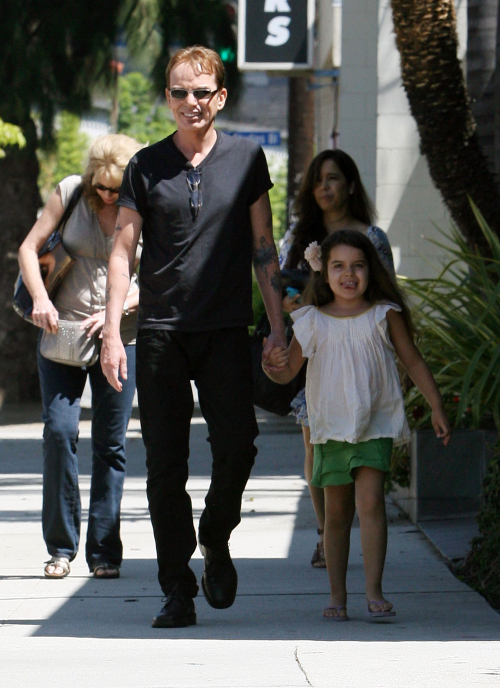 Actor Billy Bob Thornton was seen taking his daughter Bella to the studio yesterday. The father-daughter duo happily held hands and beamed brightly as mom/wife, Connie Angland, followed not far behind them while conversing with a lady friend.

Their destination was a studio in Century City, California. We’re not entirely sure as to the reason for the visit, but it could have been to do voice over work; Billy Bob lends his voice to one of the characters in the upcoming Puss In Boots movie, a Shrek spin-off.

The actor is also hard at work with his band The Boxmasters. Thornton describes the band’s sound as a fusion of “full-on punk electric hillbilly.”

I originally had this huge long rant written on how I’d never in a million years want to listen to one of their songs (honestly, I just like making fun of Celeb-actors who think they can sing). However, I couldn’t bring myself to post it after actually listening to one of their songs . . . which actually wasn’t all that bad. Despite my complete and utter disdain for Country-ish music and all things Bluegrass, I’ll admit that it was tolerable (but not incredibly enjoyable :)).

Take a listen by CLICKING HERE and tell us what you think of ol’ Billy Bob! I bet lil’ Bella is daddy’s biggest fan.

Matthew Broderick Attempts To Explain Back Surgery To Twins

Rachel Zoe Loves Being A Mom

You might also likeMore from author
Billy Bob Thornton