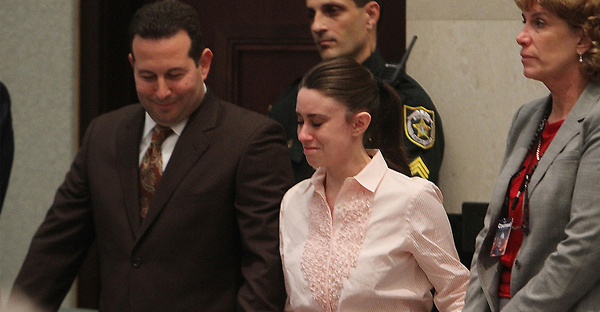 Jose Baez, Casey’s lawyer, went to New York this week to talk with network representatives about the possible debut interview, which could be set to air in the next six-to-nine months, this reported by the New York Post. It is still unknown whether Casey will be paid, which could cause an outrage from the public and could be very bad for the network who hires Anthony.

It is reported that NBC paid for Baez’s trip to New York. Winning the interview could be big for NBC because it is sure to draw a large crowd of viewers. The NBC anchors favored to interview Casey are Matt Lauer; Brian Williams and Ann Curry.

For those that don’t want to wait so long to see new footage of Anthony, they may be in luck. The unseen video of Casey doubled over and hyperventilating when she received news that Caylee’s body had been found may be released. Networks are now fighting to get a hand on it. The video was banned from the trial because it was deemed by the judge as “highly inflammatory.”

So will you tune in to watch Casey’s first interview?

Could Paris Hilton Be Pregnant?