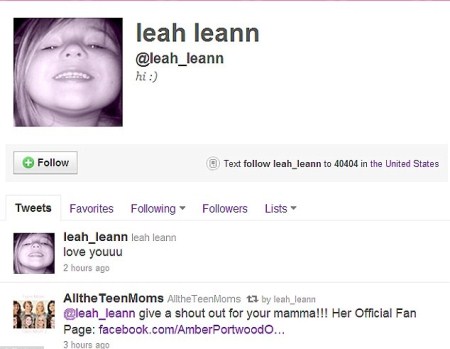 Teen Mom’s, Amber Portwood’s boyfriend and the father of their two-year-old daughter Leah, Gary Shirley, signed the baby up to Twitter.  He signed her up under Leah-leann and put a picture of her smiling in the avatar space.

‘You guys, it should be obvious that Leah has no contact with Twitter. This is just a fun concept that will in no way affect Leah herself.’

OMG! You actually think she’ll read tweets? No it’s a fun thing for us to post pics and tweets. It’s not actually her. I protect my daughter. This is for her sayings, things she’s doing, it’s all me tweeting.’

Obviously, someone so used to exploiting his daughter on national TV wouldn’t seen the problem!
Continue Reading