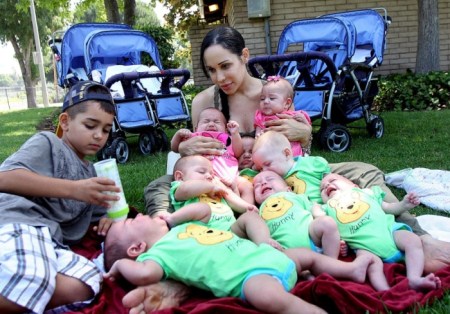 It appears that Nadya Suleman has been given a chance to extend her 15 minutes of fame.  She recently completing filming an episode of a new TV celebrity dating show called Celebridate, for the network HDNet.

‘I was lucky enough to be invited to be a part of it,’ Nadya told.

‘I have not watched TV in almost a decade, but I might just tune into this one!’

‘I don’t perceive myself to be a celebrity, but I guess they do. To a certain degree, I am in the public eye.’,

‘I’ve never dated. This is actually the first time I have dated in my life,’ she says.

‘I’ve had one boyfriend, and it was very fascinating to me; it was an unforgettable experience. I am painfully shy and anxious. That’s just my personality. So it’s difficult for me to interact and to have eye contact.’

Celebridate premières in October and will be hosted by Blind Date’s Roger Lodge. Rumor has it the show will also feature d list celebs, Dean Cain and Tracy Bingham.

Life According to Me, At 35 Weeks Pregnant