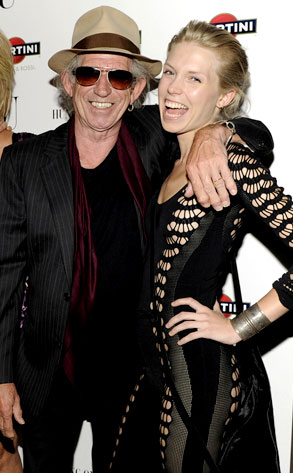 Keith Richards, long time member of Rolling Stone, has a fare amount of experience with drugs and getting in trouble with the law with drug-related offenses. Keith’s daughter, Theodora Richards, has recently gotten in trouble for similar issues, so the experienced Mr.Richards has decided to give her some guidance and advice on the subject.

“My daughter did get popped a few months ago for, like, a miniscule amount of marijuana, so I told her to give up being arrested and she agreed with me.

Theodora also learned her lesson the hard way. When she was arrested, she decided not to mention who her parents were in order to get out of the sticky situation and have the charges dropped. Instead, Theodora handled things the right way and took her punishment.

“She didn’t let on who her parents were, she spent a night in the tank and kept quiet and I said, ‘That’s the way to handle it.”

Theodora, 25, was picked up back in March after she was spotted scrawling graffiti on the side of a building, which read “T <3 A”. After the police snagged her for that, they found marijuana and hydrocodone pills on her. While in court, the judge dropped the model’s punishment down to two days of community service.