Jada Pinkett Smith Open’s Up About Her Kid’s Success 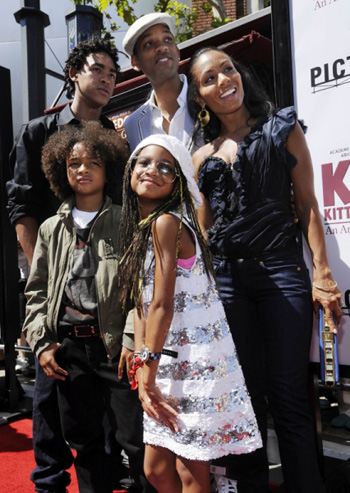 Jada Pinkett Smith is mother and strong supporter of her three kids with Jaden, Willow and stepson Trey. In the new issue of Redbook, Jada opens up about the sacrafices she had to make for her children.

“I had to make choices. Believe me, I would still be on the road with my band, Wicked Wisdom, and making as many movies as I can a year, and doing all sorts of other things if I didn’t have the responsibility of a family. But I have children with their own talents and dreams, and I know I have to be standing next to them for that journey.”

When it came to the decision between her own dreams and the dreams of her kids, Jada describes it as “completely excruciating.” The hardest part was when she chose her son Jaden’s acting career over her own singing career.

“When Jaden was auditioning for The Pursuit of Happiness my band had just gotten an offer to open for Guns N’ Roses in Europe. For me, that was unbelievable. But the choice was: I could be a rock star, or I could be on the set with my son to make sure he was healthy and happy,” Jada explains. “We all know how that story ended!”

In the movie, Jaden got to star alongside his dad Will Smith. The movie ended up grossing over $306,000,000 worldwide.  After this huge success, Jaden signed on to do a remake of The Karate Kid in return for a $3 million dollar paycheck. Not bad for an 11-year-old.

Willow, soon followed in her brothers footstep with her hit song Whip My Hair.

Jada isn’t worried about the influence being young celebrities will have upon her children.

“Let me tell you what I fear most: Them growing up like I did, in a house with drugs in a war zone, where if I walked out my door I could be shot,” Jada admits. “Hollywood ain’t nothing compared to that! Growing up in the streets of Baltimore, or the streets of Philly where Will grew up — I’d rather have my kids here. It still makes me nervous that they’re part of something that isn’t totally real, but it’s up to Will and me to teach them what’s real and what’s not.”

Gwen Stefani’s Kids Spend the Day With the Nanny