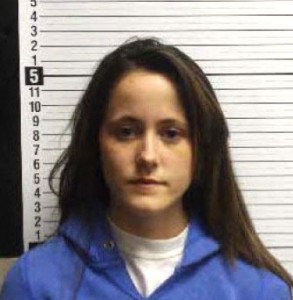 Jenelle Evans, the troublemaker from Teen Mom 2 who’s infamous for constantly bickering with her mom, is in the news once again. Last month, Evans pleaded guilty to posession of drug paraphernalia. The charges will be dropped if she successfully performs 24 hours of community service and will also face 12 months of supervised probation.

Also, Jenelle and her boyfriend Kieffer Delp were arrested back in October for breaking into an abandoned house to smoke marjuana in it. After all the drama, she recently signed over custody of her son, Jace, to her mom, Barbara Evans. To add to the list of her crimes, Jenelle was arrested in March for assault. The charge came after TMZ posted a video of Evans attacking another girl. Evans was arrested and shortly released on bond. Her attorney claimed that Jenelle was “set up“.

Now the 19-year-old troubled star is entering rehab. Supposedly Jenelle “is clean right now” and has been for several weeks. “She’s doing this [rehab] program to help her cope with all the stress in her life: her family situation, her legal issues, her general anxiety,” a source stated.

Mario Lopez wants your kids to be fit (VIDEO)