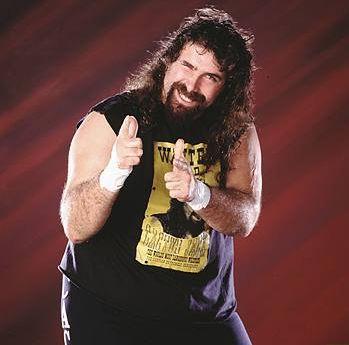 Wrestling legend Mick Foley who has taken more beatings and suffered more abuse in the ring than practically any other professional wrestler is mowing lawns across the country for a cause.

The man who gave life to such characters as Dude Love, Cactus Jack and most famously, Mankind is on a brand new fundraising campaign for the Rape, Abuse, & Incest National Network.  Mick has offered to mow the lawn of anyone who who donates $5,000 or more to the organization.

Mick is a board member for the Rape, Abuse, & Incest National Network and several other charities was mowing a lawn in Baltimore yesterday.

If you don’t have a lawn Mick will still participate with you by matching your donation – up to $10,000 – throughout the month of April.

Mick Foley made it to superstar status in pro wrestling without a good physique, massive muscles, or great athletic ability – he also has a decent brain having authored several books entirely on his own.

Did Sarah Palin Lie To America? Is Bristol Palin The Mother Of Trig? Professor Says ‘Yes!’

Help Give Premature Babies a Tomorrow