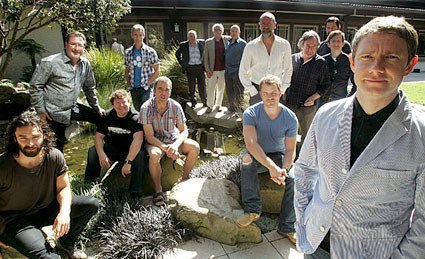 The Hobbit, is a fantasy novel and children’s book by J. R. R. Tolkien.   It was published on 21 September 1937 to wide critical acclaim.  The book is being turned into a movie and filming has been delayed many times.  The movie finally begins production March 21st, 2011.  The part of Bilbo Baggins will be played by Morgan Freeman.

Here is a group shot was taken just outside the Park Road Post Studios in Wellington, New Zealand, on Thursday, where the cast members held a press conference to discuss the project.  Included in the picture is Morgan Freeman and the 13 actors who will play dwarves.  I am so excited to see the movie – I love Lord of the rings 🙂  How about you – will you see the movie?