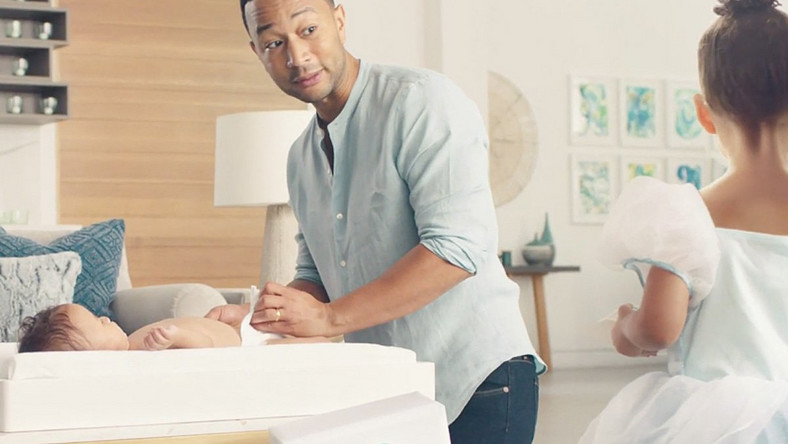 It looks like there’s nothing stinky about this Super Bowl Commercial! Celebrity dads John Legend and Adam Levine are getting lots of love from their fans for inspiring men to step up to the challenge in a new Pampers ad that aired during the big game on Sunday evening.

In the Pampers commercial, John Legend serenades his eight-month-old son Miles while changing his diaper with the help of an all-dads chorus line behind him in what a lot of people are calling the most heartwarming commercial of the Super Bowl. The camera then pans to halftime performer Adam Levine, who finishes the song by singing “And Daddy’s gonna clean it up!”

John’s wife Chrissy Teigen, meanwhile, has gone on the record to confirm that she wrote the ‘Stinky Booty Song.’ It’s such a hit in their house that John sings it almost every day to his kids, including their daughter Luna.

“She still loves the song even though she’s potty-trained,” the chart topper said, according to People Magazine. “We’re using it on Miles now.”

As far as who does the most diaper duty at home, John admits that it’s a collaborative effort between him and Chrissy.

“It’s just whoever is able to do it at that time,” he said. “It has never been a thing where it’s like, ‘You have to do it or I have to do it.’ It’s like, ‘Okay, I have him right now and his diaper needs changing, I smell it, I’m going to change him.’ I’ve always been like that, and never felt any hesitancy to do it.”

It’s great to see that more and more fathers are getting into the act, so to speak. Here’s hoping that John Legend and Adam Levine will help encourage even more fathers get down and dirty when it comes to changing all of those “stinky” pampers!

In the meantime, let us know what you think by leaving us a line with your thoughts in our comments section below. And as always, don’t forget to check back with Celeb Baby Laundry for all the latest news and updates on all of your favorite celebrity parents and tots right here!