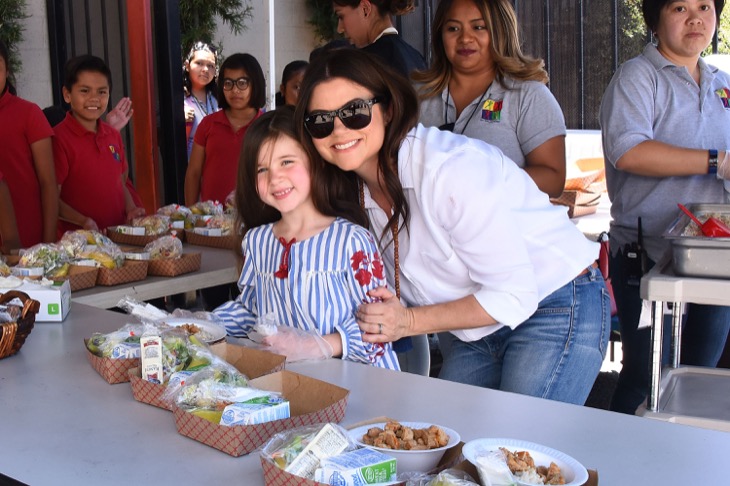 Tiffani Thiessen and her daughter Harper Smith are helping those in need in their local community. The celebrity mother and daughter duo were on hand for the Feeding America’s Summer Hunger Awareness event in Los Angeles this week. Together, they helped serve lunches to underprivileged kids through the Feeding America program.

Tiffani looked cool and casual in a white blouse and jeans while her daughter had on a summer stripped dress. They posed for photographers, helped hand out lunches and mingled with fans during the star-studded event. Tiffani also has a son, 2-year-old Holt with her husband Brady Smith.

Meanwhile, the television actress also opened up about playing a mean mom on her upcoming Netflix series, ‘Alexa & Katie.’ The series is about two life-long friends who are eagerly anticipating the start of their freshman year of high school. The friends confront a crisis that leaves them feeling like outsiders at a time when what seems to matter most is fitting in. Tiffani plays Lori, Alexa’s protective mother.

She told Entertainment Tonight in a new interview, “The show, it has a very serious message, but it’s a comedy. I play the mother of a teenage girl that’s actually going through cancer.”

Tiffani added, “It is [a serious role], but at the same time, it’s a coming-of-age story about these two young girls embarking on high school, and even though there’s cancer to it, they really try to make it light. Kind of the hard part of it is just being teenagers: they’re worried about what they’re going to wear to high school, and, you know, things that we all worried about… on top of her having cancer.”‘

Alexa & Katie’ will have 13 episodes and is expected to make its Netflix debut sometime in 2018.