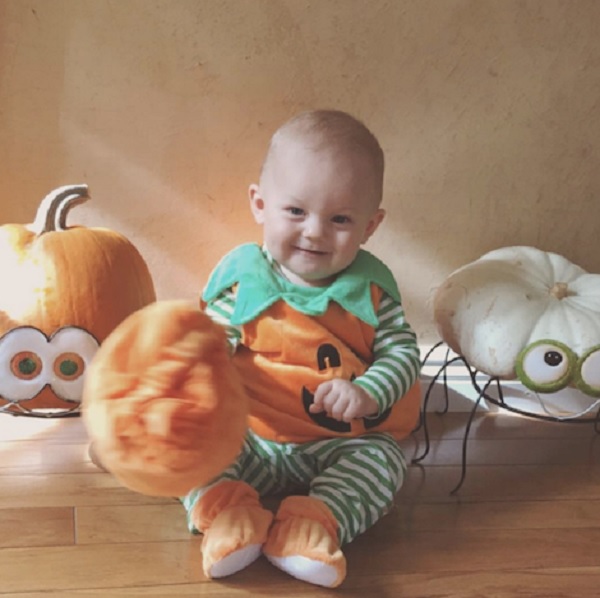 One Direction singer Louis Tomlinson’s baby boy Freddie is already 9 months old, and this month he will be celebrating his first Halloween!  There is seriously nothing cuter than babies in costume – and lucky for us Briana Jungwirth agrees.  Freddie’s mom took to social media to share a sweet snapshot of Freddie in a pumpkin costume.  It looks like the 1D baby has the Halloween spirit!

Briana Jungwirth, a 23 year old stylist to the stars based in Los Angeles, California, gave birth to Freddie Reign Tomlinson on January 22 2016.  The adorable almost one year old is already a celebrity in his own right, and Louis Tomlinson’s diehard fans are obsessed with the cutie pie on social media.  So much so, that Louis and Briana have actually been at odds over Freddie’s mom sharing private photos of the baby publicly on social media.

Louis Tomlinson and Briana Jungwirth are no longer in a relationship, when they announced Briana was pregnant with Freddie the young parents made it clear then that they were no longer involved romantically and “just friends.”

Since Freddie’s birth, Louis and Briana have been in the news constantly because of their legal issues and disagreements over custody and child support.  On the bright side, whatever seems to be going on with Tomlinson and Jungwirth doesn’t seem to be having too much of a negative affect on Freddie – the 9 month old appears happy and healthy in his latest snapshot, which is proud mom appropriately captioned “Halloween Dress-up.”

What do you think of Freddie Reign Tomlinson’s adorable pumpkin costume?  Let us know in the comments below!