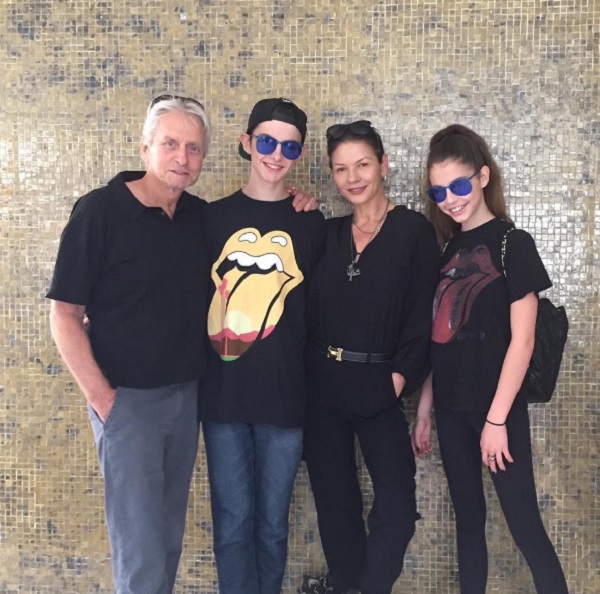 Catherine Zeta-Jones and Michael Douglas have had a tumultuous marriage over the years, despite their issues, the couple’s adorable kids Dylan and Carys seem to be flourishing.  And the youngsters are all grown up!  It seems like just yesterday that Catherine and Michael were being photographed toting around their little ones.  Now, Dylan and Carys are young adults.

Catherine took to Instagram this week to share some rare family photos with herself, Michael, and their teens.  Of course, Catherine’s followers and fans were shocked by how grown up little Dylan and Carys are.  They aren’t so little anymore!

This says it all. Watching my son see his idols for the first time. Made this night for me. #TheRollingStones #DesertTrip

The family recently attended a Rolling Stones show, it turns out that 16 year old Dylan is a huge fan.  Zeta-Jones shared a photo of the family holding their tickets to the show and captioned it, “So excited. Tickets ready. A Friday night with Bob Dylan and The Rolling Stones!!! Can’t breathe with excitement!!! A #DesertTrip of a lifetime!”  The proud mom also shared a photo of Dylan wearing his Rolling Stones jacket before the show.  She bragged, “Watching my son see his idols for the first time. Made this night for me.”

Are you shocked by how grown up Catherine and Michael’s kids Dylan and Carys are?  Let us know in the comments below!