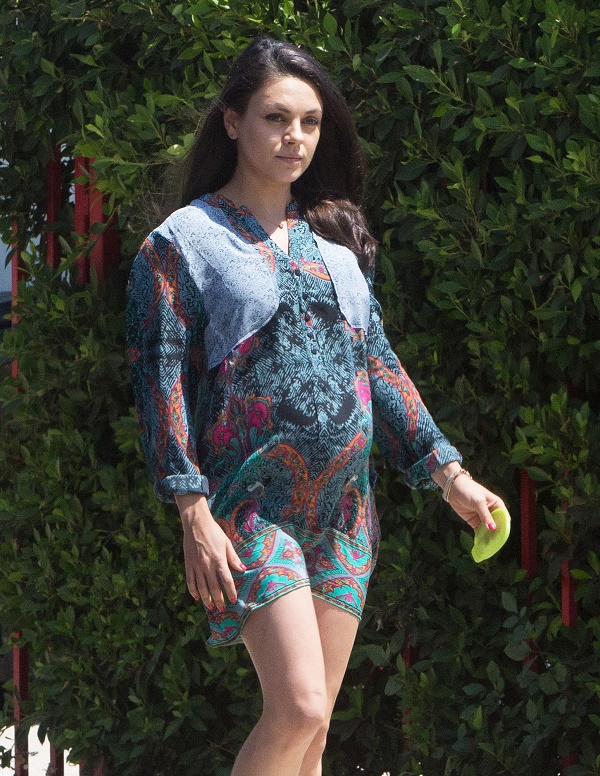 Pregnant Mila Kunis was spotted out and about in Los Angeles, California on Wednesday August 24, the actress’ growing baby bump was on full display while she ran errands.  Mila seemed to be in good spirits, and isn’t letting her pregnancy get in the way of her day, dressed in an adorable flower print dress, she even stopped to give a stranger directions in the busy streets before heading to her own car.

Mila Kunis and her husband Ashton Kutcher confirmed that Mila was indeed pregnant and they were expecting baby number two in June 2016, it’s still unclear when Mila’s exact due date is.  But, judging from how fast her baby bump is growing, it isn’t too far off.  Ashton Kutcher and Mila already have baby Wyatt Isabelle together, she will turn 2 years old this Fall.

Mila and Ashton are pretty private when it comes to their family and daughter Wyatt.  However, Ashton did take to Instagram this week to let his followers know that he and his wife have been updating their home in preparation of another little one.  Kunis and Kutcher had a state-of-the-art Alexa voice system installed in their home, and now everything in their house will respond to their voices.  That will certainly come in handy in the middle of the night during newborn feedings!

In a recent interview with Ryan Seacrest, Mila stated that her second pregnancy was going smoothly, and even revealed that she is open to having more kids after baby number two is born.  The actress dished, “After we had Wyatt, the second that I gave birth, I was like, ‘I know that we need to have another baby.  And so I always say after the second one, we’ll know if we need to have another one. I really do believe you know when your family is complete.”