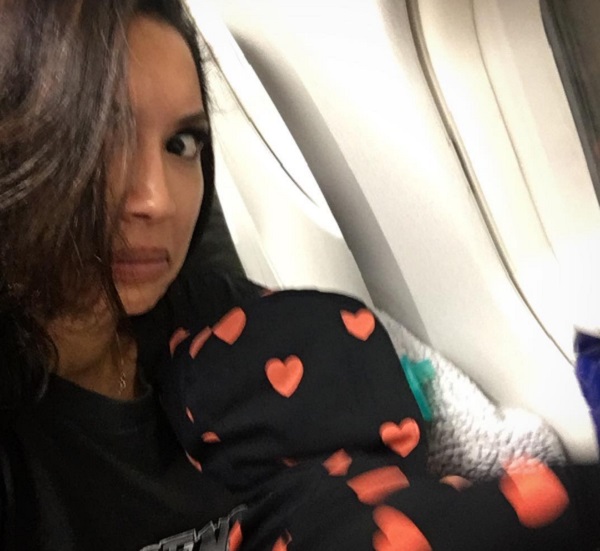 Naya Rivera’s son Josey Hollis Dorsey will be turning a year old on September 17 2015.  The busy actress and mom is constantly sharing snapshots of her growing baby boy on Instagram for her fans and followers.  This week Naya Rivera shared an adorable throwback photo that every mom can relate to, her son Josey’s first trip on an airplane.

In the “Flashback Friday” photo, Josey appears to still be a newborn baby, and Naya Rivera is snuggling with him on an airplane seat.  While Josey appears to be content and asleep, Naya is clearly freaking out, and has a hilarious look on her face.  What mom hasn’ gotten a little nervous the first time they took their little one on an airplane?

Naya Rivera is best known for her role as Santana Lopez on the hit FOX series ‘Glee.’  Naya married her longtime friend Ryan Dorsey in July 2014, and then she and her hubby announced they were pregnant with their first child on social media in February 2015.  Baby Josey was born in September 2015, and he will celebrate his first birthday in just one short month.

Earlier this summer, Naya Rivera opened up about the transition to motherhood in an exclusive interview with People Magazine.  Naya joked that she had worked as a nanny in the past, so she had been “thrown up on and pooped on,” she knew what she was getting herself in to when she became pregnant with Josey.  Her husband Ryan Dorsey was a different story.

Naya dished, “He changed Josey’s first diaper in the hospital, which was hilarious, because Josey just kept continually pooping.”  But, Ryan has come along way, and now he has mastered putting the baby to sleep with ease, thanks to his guitar and remarkable singing voice.

How to Prepare Healthy Lunches This School Year