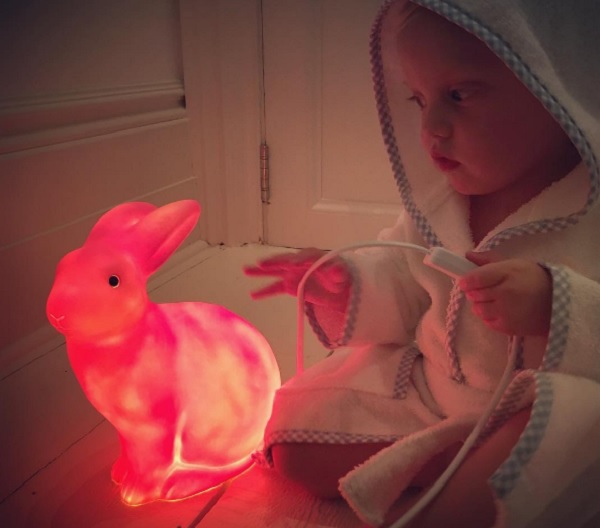 Liv Tyler’s baby boy Sailor Gene has the CUTEST nightlight that we have ever seen, frankly we are a little jealous!  The proud momma took to Instagram today and posted an adorable photo of 18 month Sailor Gene Gardner posing with a glowing pink bunny nightlight that is nearly half his size.  Of course, Sailor looked too cute for words, and appears to be fresh out of the bath and ready for bed in his very own bathrobe.

Sailor Gene’s mom Liv Tyler (yes daughter of THE Steven Tyler) just gave birth to her third child last month.  Liv and David Gardner announced the birth of their baby girl Lula Rose last month, she was born on July 8 2016.  Liv also has an older son, 12 year old Milo Langdon, from a previous relationship.  Sailor and Lula’s father David Gardner also has children from a previous relationship as well.   They have quite the blended family!

Liv has also been sharing some sweet snapshots of Sailor’s little sister Lula on Instagram as well.  It looks like Liv has had her hands full this summer, especially with a newborn baby.  That might explain Sailor’s new nightlight.  As cute as it is, it might also serve an alternate purpose, like getting Sailor to sleep on his own since Liv is probably up all night with Lula Rose.

What do you guys think of Sailor Gene’s new bunny nightlight?  Isn’t it adorable?!  Do your kids have something similar?  Let us know in the comments below!