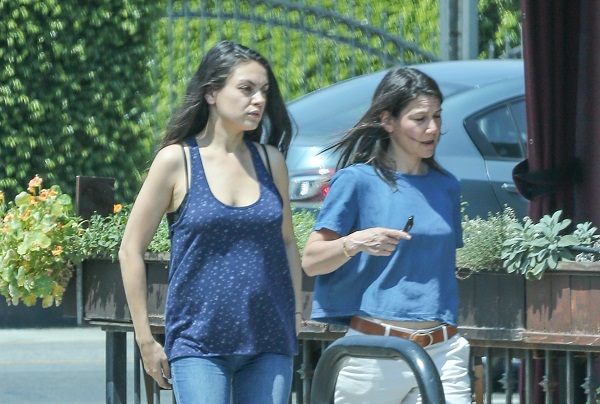 Mila Kunis was out and about, baby bump and all, on Tuesday June 21 2016.  The actress was spotted in Los Angeles, California grabbing lunch with a friend at Cafe Gratitude.  The actress was wearing a loose fitting blue blouse, and a noticeable baby bump was starting to show.  This was her first public outing since her second pregnancy was confirmed.

Mila Kunis and Ashton Kutcher confirmed earlier this month that Mila is indeed pregnant with baby number two, judging from Mila’s tiny bump, it looks like it is still early on in the pregnancy.  Mila and Ashton already have 1 1/2 year old daughter Wyatt Isabelle together.

Mila Kunis and Ashton Kutcher have always been very private about their relationship and family.  Although tabloids reported that Mila and Ashton were trying for baby number two, the couple has been pretty mum about their intentions to have more children.  It looks like they definitely were planning on expanding their family though.

32 year old Mila recently sat down for a rare interview with Pop Sugar and discussed her life as a mom to baby Wyatt.  “She’s rambunctious but she’s not there yet where she’s two-and-a-half and I’m like…’this is demon baby,” Mila dished.

Kunis also added, “I only have one little human. She’s not so bad…I have an amazing husband and my parents live in same town as I do…but she’s only 17 months old.”