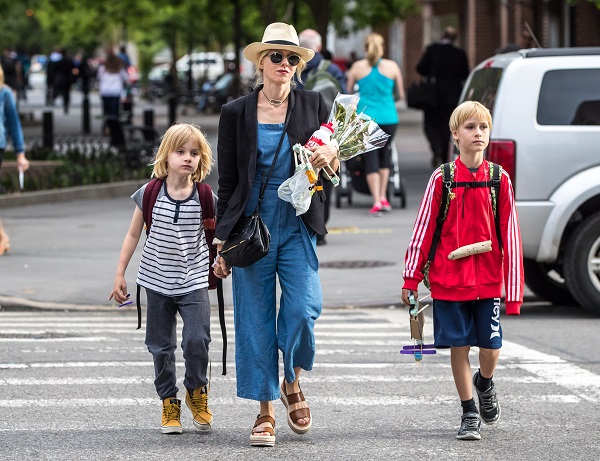 Actress Naomi Watts was spotted out and about in New York City on Monday May 23 with her two sons Alexander Pete (9 years old) and Samuel Kai (10 years old).  Naomi stopped at the market to pick up a bouquet of fresh flowers, then she took Alexander and Samuel to a street vendor to get them each a hot dog before heading home.

Naomi Watts has been dating Liev Schriber since 2005.  In 2007 their first son Alexander was born, and then Samuel came a year later.  Naomi and Liev have always been very quiet when it comes to their family and their personal lives and it still remains a mystery whether or not the couple ever married.  Liev did slip up in a an interview a few years ago and refer to Naomi Watts as his “wife” – but it was never confirmed.

Last month it was announced that the mom of two had landed a new gig as the lead role in the 10 episode long Netflix thriller, ‘Gypsy.’  Not only will Naomi Watts be starring in the new series, but she also is listed as an executive producer. Watts will be playing the part of a psychiatrist that gets way too involved with her patients, and the people in their lives. On top of her new Netflix series, Watts is also slated to start filming a new adaptation of the classic play ‘Ophelia.’

It really is impressive that Naomi manages juggling such a busy career, and still manages to do the simple things with her sons Alexander and Samuel, like stop for hot dogs at a street vendor.

Disney’s BEAUTY AND THE BEAST Teaser Trailer – All The Details