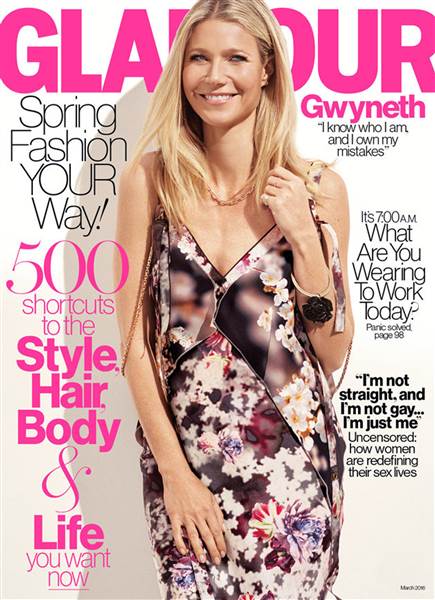 Gwyneth Paltrow covers the March issue of Glamour magazine while opening up about how she and ex-husband Chris Martin successfully co-parent since divorcing almost two years ago.

The actress says it’s important to stay close despite not being involved romantically.

“We’re still very much a family, even though we don’t have a romantic relationship,” Paltrow told while, adding, that these days thinks of Martin“like a brother.“

Continuing to stay a family after divorce is also key to Paltrow.

“Well, the ideal is to stay married. But if you can’t stay married, wouldn’t the ideal be that you could still be a family and you could put aside your own stuff long enough to explore — what is this new family and who am I in it?”

Paltrow admits she is lucky her ex-husband is on the same page as her.

“And Chris is a great ex-husband [because] he’s a very, very willing partner in how to do that,” she said. “We’re constantly putting aside our own stuff and trying to re-imagine something that we don’t personally have an example for.”

Paltrow told the mag that they have no issues visiting issue other and in fact spend many weekends and holidays together.

When it comes to their two children Apple and Moses, she says they’re already talking about pursuing careers in the entertainment industry.

“They’re naturals — they sing, act, play guitar, do stand-up — it’s brimming out of them,” Paltrow said. “So I feel like my mother. Whenever I said I wanted to be an actress, she said, ‘Oh no, don’t. You’re too smart to be an actress. Do something else!'”

To read the full cover story interview pick up the magazine on newsstands.